I sat, wedged tightly in the corner of my 1.5’x1.5′ fifth wheel ‘bathroom’, with my knees tucked to my chest and my eyes glued to the title of an article I never thought I’d find myself reading: ‘How To Unclog An RV Toilet’. It wasn’t a bathroom so much as it was a closet with a toilet in it, and calling the toilet a ‘toilet’ held as much weight as calling a kangaroo a racehorse. I mean, technically, you could sit on both of them, right? It might be the last thing you ever do, but hey.

The stained monstrosity gurgled before me in the moist Florida heat. I was past the point of disgust. That ship sailed weeks ago when I opened up the ancient looking camper for the first time upon its arrival and quickly discovered that it had either been used as a porn shack or hosted an animal hoarder. You couldn’t really tell what all those little black hairs were but the used condoms that I fished out of the black tank with my homemade coat hanger wand indicated that the former idea was the most likely candidate. Unfortunately, the removal of said used condoms from god-knows-when and god-knows-who still did not fix the continual regurgitation of sewage sludge from the plastic throne.

You’re probably reading this with the appropriate level of horror I should have felt but even at that point, in the lowest of lows, I was grateful to have a roof of some sort over my head. In the nearly three years I lived in Wellington, Florida, I had lived in a garage, a balcony, a shitty apartment with an abusive roommate, and been homeless and lived out of my truck for several months. All for the ability to work and train in the world’s epicenter for showjumping. The two horses I brought with me from Texas to produce and show had fared far better than I did in the sunshine state. A trade off, even in its most extremes, that was worth it to me.

Being able to move into my own space despite it being a rancid shithole, for lack of better terms, was so freeing to me that I remember sitting on the grimy floor, hugging my dog, crying tears of gratitude. 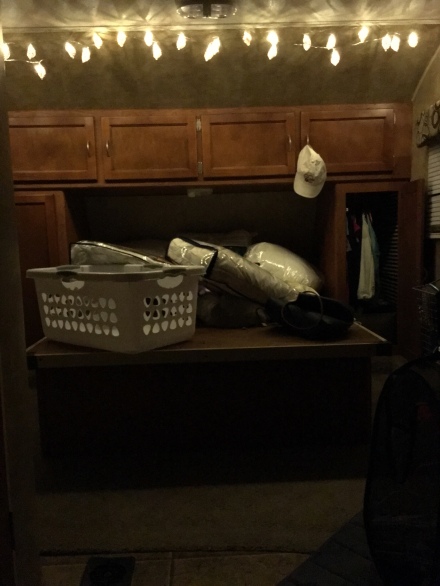 If you hang up enough fairy lights, and only take pictures in the dark, no one can see that you’re living in a biohazard on wheels! Life Pro Tips from Michelle.

I stared at that toilet through the haze of bleach and Drano that I had desperately poured into the bowl. The chemicals hissing as they produced a toxic fog in the tiny space. I had woken up that morning to the feeling of suffocation because I lit one of those Jesus candles from the Dollar Store in a last ditch attempt to exorcise whatever unholiness possessed the camper, somewhat endearingly referred to as ‘Walter White’. Much like the infamous rolling meth lab death trap, my Walter White had little to no ventilation and the candle quickly began to burn up all the oxygen.

“Clearly, I need to up my game,” I thought to myself.

“I can handle this, I’ve been through worse. I’m pretty resourceful, how hard could this possibly be?”

And so, with the determined resolve and stubbornness that only I am particularly known for, I set out to Home Depot. I was on a mission to build a “Black Tank Toilet Wand” which is just as magical as it sounds. The article also stated that in extreme cases, the toilet must first be penetrated and pumped by your PVC pipe, which would later become part of your wand. At the checkout counter, the teenaged cashier looked at my items and then up at me with an innocent twinkle in his eye. “The gardening gloves are in that aisle over there so you don’t have to use these rubber ones. It’ll be hard to use these in the soil, you don’t get a whole lotta feel in them.” “Oh,” I laughed dryly, “what I’m using these for, I hope I don’t feel a thing.”

I trekked back to Walter White, propped the flimsy toilet room door open with my bag o’ toilet treasures, dropped to my knees in front of the crapper, and wielded the PVC pipe high above my head as I prepared to battle the Bowels of Hell. The youtube videos I had watched instructed me to plunge the pipe up and down the gullet of the toilet with the idea that it would either soften up or jiggle the blockage(s) out of the way enough to snake a garden hose and eventually the then-made wand into the black tank and spray the sin away. “Alright Lils,” I grinned at the dog sitting cautiously outside the doorway, “here we go!” I stabbed the pipe into the toilet with gusto, then horror, as the God of Poo battled back. Sewage convulsed back through the pipe and sprayed directly into my face, up my nose, into my mouth, my hair.

Lily skittered backwards, tripping on her tail and hitting the door as she ran for her life from the eruption. I rocked back on my feet and bashed my head against the wall, slumping down in defeat into the cesspool. In the shock and silence of that moment, I realized that I had a choice to make. Retrospectively, this choice was a redefining moment for me. It created a snowball effect in how I approached problems in my life, no matter how strenuous, heartbreaking, or devastating. It was this exact moment that I feel reinforced my character. A character that I hope I can share with anyone who feels that they’re alone in their struggles as well as endeavors. At the very least, I want to provide some sense of anecdotal relatability, as I feel that there have been many times in my life that I wished someone could give me the same.

I opened my mouth and I laughed. 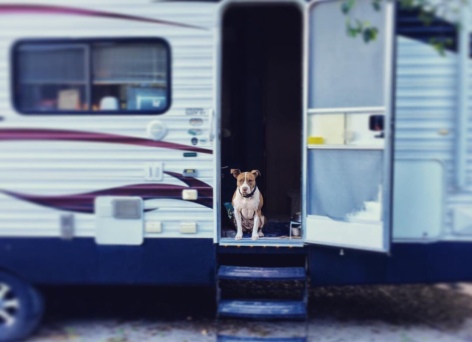 This is what a feminist looks like. View all posts by michellemillertx